Betty Hayworth is hiding from her life. She endured cybernetic enhancements to serve her country as an international spy, but infiltrated top-secret information from her own government as a high-end escort 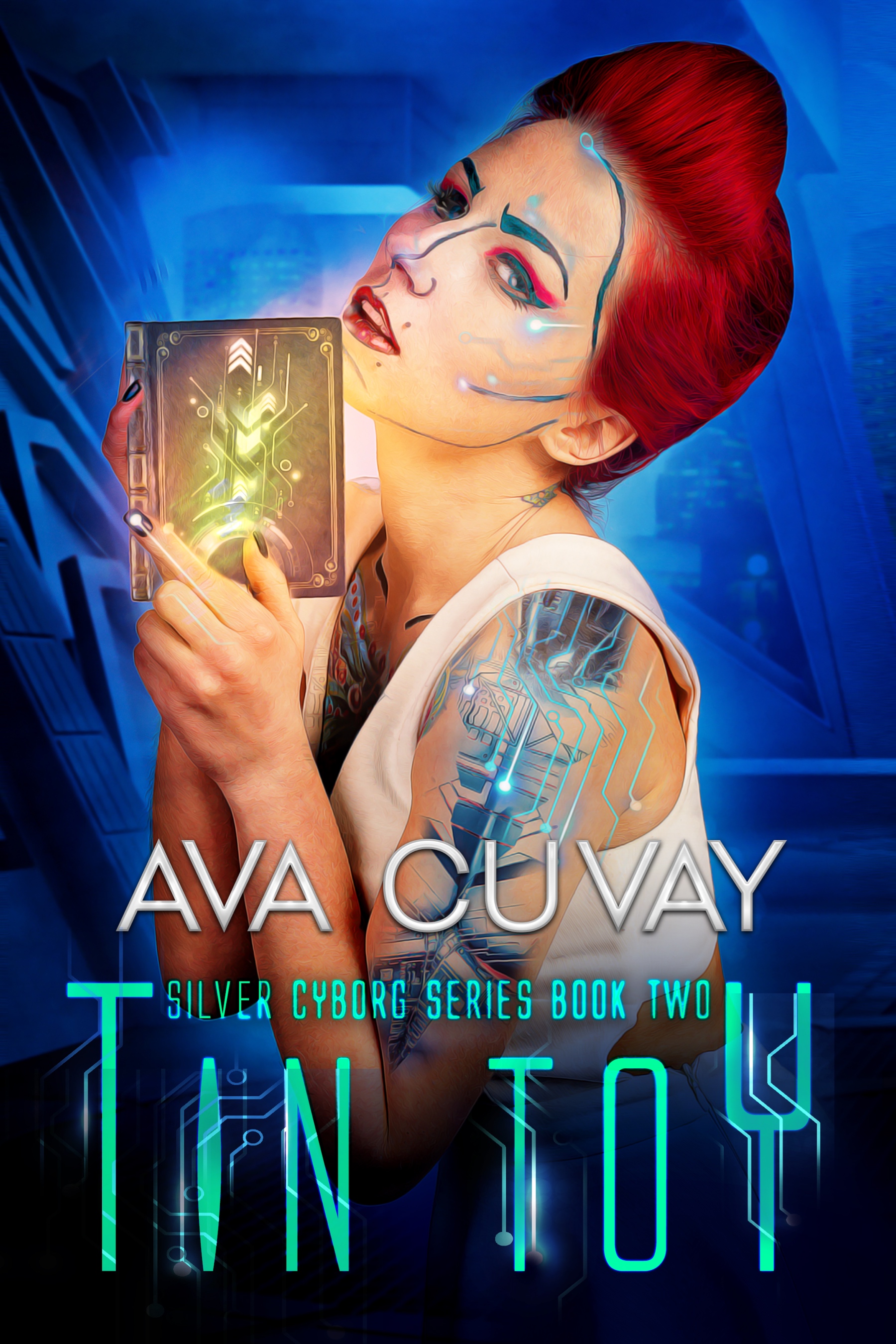 instead. So, she ran away to a small Indiana neighborhood where she works as a librarian and fears her handler will track her down or her cyborg status will be exposed to a society that abhors them. None of which helps her find the kind of love and happiness she reads about in her romance novels.

Everett Dean is running for his life. As founder and CEO of the premier cybernetic design company, someone is trying to destroy him. His life, his company, his legacy. He needs to discover the truth and expose whoever is behind the recent attempts on his life, before they try again. This search leads him to an unassuming library where he meets an enigmatic woman who looks like a pin-up model, fights like a trained assassin, and kisses like an angel. All of which inspire him to reassess his life’s priorities.

Their mutual attraction is a risk neither can afford. But as complications from their secrets arise, they must learn to trust each other if they hope to survive.

Book Two of the Silver Cyborg Series trilogy. This story has a romantic happy ending and a storyline continuing to book three.

Check out this Books2Read page for quick links to even more online retailers: https://books2read.com/u/49LO7Y

awakening of Níðhöggr, Destroyer of the World. But he can’t stay away from the delicious cuisine of his new favorite Chinese restaurant, or its beautiful owner, who whets his hunger. He can’t seem to say the right things around her, and he certainly can’t reveal his shifter abilities. But with a grim prophesy threatening the fate of the world, can he be blamed for seeking moments of sweet release with her… in bed?

Wu Lin’s newest loyal customer is a sexy Nordic god of a man who makes her inner dragon stand up and beg for bread and butter. She’d give up her family’s red bean bun recipe to get a peek at his mighty hammer, but she’s the last dragon-shifter of her clan, and her time and energy must be focused on the upcoming battle against the demon monster Móshen who is prophesized to demolish the Earth. Even so, Ty complements her in every way. Could it be she has found the yang to her yin… in bed?

This 33K novella is one in the Star of the North Dragon series, which can be read in any order or as standalone novellas. Ebook available exclusively through Amazon and Kindle Unlimited. Print books available through multiple online retailers.

Check out this Books2Read page for quick links to even more online retailers: books2read.com/u/bxQ5kd

“Tin Man” Book One of the Silver Cyborg trilogy

save his life, but the decision killed his career. Now working as a bar bouncer in a society which both fears and loathes cyborgs, Adam wants to lay low until either his aging human parts, or his glitching cyborg parts end his lonely life.

Eve Myer has critical information about her employer’s corporate corruption which is killing cyborgs. But when the internet whistleblower she meets at a bar takes a fatal shot meant for her, she clings to the sexy yet reticent bouncer’s offer of safety. She finds both protection and passion in his arms even as an unknown adversary is determined to destroy her information, and her.

Adam and Eve struggle to keep their own secrets in the face of their escalating feelings and the mounting threat on their lives, even when that threat comes from each other.

Book One of the Silver Cyborg Series trilogy. This story has a romantic happy ending and a storyline continuing to book two.

Check out this Books2Read page for quick links to even more online retailers: books2read.com/u/brwj0M

Alana LaRue assumes the sexy merman pictured on the lake house wall is “just art.” Then a violent storm topples her into his arms and she discovers the ocean isn’t the only thing that gets her wet.

Originally published in the Crossroads Romance Authors “Lake House” Anthology, this 16K short story has been expanded, with more details and a love scene added.

Available in both digital and print formats.

Check out this Books2Read page for quick links to even more online retailers: books2read.com/u/mBw1RA

A vacation that sucks; an alien king who bites.

Kazandra Lyon’s failed life sucks. But her vacation to a popular destination-planet sucks on a whole new level when she’s abducted and whisked off to a dark castle mired in twilight. She struggles against the attacks of a bloodthirsty monster and her growing attraction to the sexy and mysterious vampire king. Amidst murdered palace staff, political power struggles, and the king’s blood-searing seduction, has Kaz bitten off too much? Will she return to the unhappy safety of her failed life or stick her neck out and embrace a future with the lusty king who thirsts for her?

Away from his homeworld for far too long, King Rune Lahdunae’s political influence has weakened and his vision for his people is now a relic from a bygone era. He struggles to regain his royal standing as monarch, resurrect his race’s proud heritage, and keep his randy fangs off his beautiful guest. Yet Kazandra’s spirit and humor arouses a hunger in him more primal than the need for her life-giving blood. Can he entice her to remain as his honored guest… and possibly his wife? And can he thwart the relentless killer who is drinking his people dry before Kazandra becomes the next victim?

(This book contains explicit language and vivid relations. Intended for a mature audience.)

Check out this Books2Read page for quick links to even more online retailers: books2read.com/u/49kOqk

“LOVE AND THE CORPS”

Bound by duty, two soldiers yield to their hearts’ command.

Captain Jo Behsue has never questioned her career with Central Command’s leading military force—until now. Recent mission failures and the constant battle for acceptance from her fellow Corpsmen kindle her frustration, while the attention of a golden-eyed Klorakian mercenary ignites her body. Wrapped in his arms, she discovers even a scarred, hollow shell of a captain can love.

An officer in the Klorakian militia, Lux fights to return the rightful monarch to their homeworld’s throne—a planet which scorns his genetic shortcomings. He is loyal to his cause and king, but faces a bleak future once their mission is complete. His seduction of the combative yet beautiful Captain Behsue provides a glimpse of hope, and he fights for a life with Jo, who finds only beauty in his defects.

(Winner of the 2015 On The Far Side Contest for unpublished authors, HardScifi/Scifi/Futuristic category. This book contains explicit language and vivid relations. Intended for a mature audience.)

Check out this Books2Read page for quick links to even more online retailers: books2read.com/u/3LyLBe

One illicit lap dance becomes a flight for their lives.

A stripper with dreams of being a princess.

An intergalactic thief with a freighter of stolen cargo.

At the outskirts of space and away from the rigid control of Central Command, Granger entices Kaedi to break her strict no-lap dance policy. The repercussions force her to pack up and hitch a ride off-world in the same freighter he has hired. They discover a passion hotter than a super nova, but their plans are shattered by the untimely death of the ship’s captain and the duplicity of the co-pilot.

The two lovers crash headlong into the clutches of Granger’s best-friend-turned-torture-happy-enemy. When Granger’s heritage is revealed, Kaedi relinquishes the pleasure she finds in his arms, believing herself unworthy. Granger chases after her, determined to convince her she is more precious to him than stolen cargo.

(This book contains explicit language, vivid relations, and the word “moist.” Intended for a mature audience.)

Check out this Books2Read page for quick links to even more online retailers: books2read.com/u/mgjD6x